My making day yesterday focused largely on rearranging works into groupings, trying to imagine and visually link pieces which could potentially be in the show. There are certain colour themes which run through my latest stage of work. These link to the colour palettes I have been exploring to try and make colour choices more surprising.
Also thinking about where figures in different picture planes should appear in relation to each other – not next to by near by to make a visual link without an obvious pairing. I also noticed a type of line emerging which is broader and smoother (made by the scraping tool). This seems to work in terms of scaling work up and showing a true gestural line. 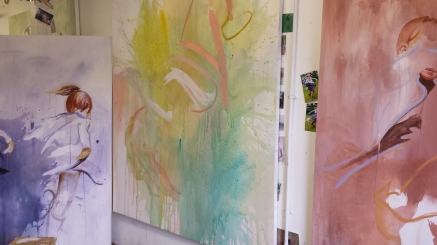 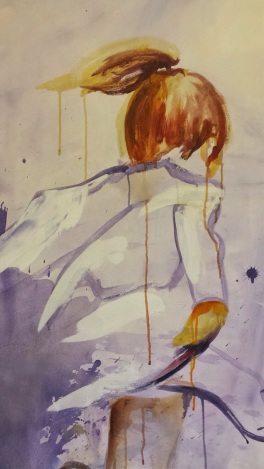 I am clear that all of these pieces fall within the trace dance series, however I now have the problematic task of titling work.
Ideas so far…
Number #1 (from Trace Dance series) – May create a hierarchy
Pathways
Literary quotes- need to be short and slightly altered
Places – implying environment and an incident
Names (children)
Juxtaposing words in pairs – binary but not as obvious as black/white
Murder Girls – Mary McCarty this is interesting as only the name of the girl and the date of the murder are included in the title. The murder info is provided as additional information and the image can be provocative and speak for itself.
Study in (colour)
Balthus – Girl with Cat – states what it is but image brings more sinister sexual theme
Woodman – untitled or House #3
Eleanor Antin – caught in the act – whimsical connotations
Inez van Lamsweerde – Final Fantasy: Wendy
Anna Gaskell – Untitled #03 (wonder) – is it characteristic of photography to be given serial numbers or is it to do with the exploratory ambiguous nature of the work?
Justine Kurland – Jungle Gym
Lucy Gunning – climbing around my room – both indicative of movement
Ahtila – Today or The Present – temporal
Kiki Smith – Wolf – accompanied by text
Collier Schorr – in the garden (torso)
McCarty – Marlene, Jan 1, 1975 (full name and address)
All from Girls! Girls! Girls!
Rego – the policeman’s daughter – ‘the’ indicates unique or original/only
Peter Doig – white canoe, orange sunshine
Tillmans – http://www.theguardian.com/artanddesign/2010/jun/26/wolfgang-tillmans-serpentine-photographs-exhibition
Bacon – study for, study after (Velazquez), second version of, Head 1 -acknowledges states of work – narrative?

Reflection
Considering using contrasting titles to setup dialogue, May serial numbers with series in brackets. Like second version…how is this different to #2? I don’t think that a descriptive or literary title will work as my work is more fluid, however leaving the works untitled seems to indicate less clarity with the intentions – it is as easy to give short, open titles to suggest rather than define interpretation. I also need to consider display of labels.

I eventually decided on serial numbers for my series of work. Trace Dance 1.1, 1.2, 1.3 etc. This is the most simplified version of the titles I could generate and works really well to link the pieces together – I think there will be 1.1-1.8 in this series. It references the duey decimal system used in libraries which implies my theme of narrative and links to the inner reference library. The work is placed in series and linked by title which gives context. It also leaves space for the development of Trace Dance 2.1 etc after the MA (see personal practice plan).